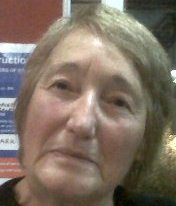 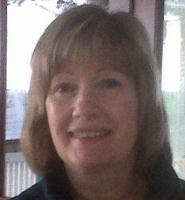 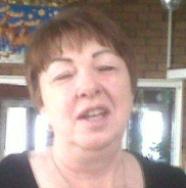 Waking Up In Narnia 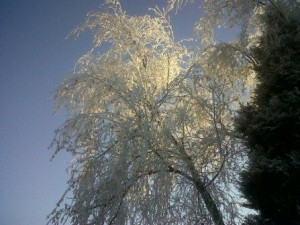 I took this photograph of the Silver Birch when the sun came up this morning. The temperature was hovering around minus six and all the trees were looking very Christmassy.

Black are my steps on silver sod;
Thick blows my frosty breath abroad;
And tree and house, and hill and lake,
Are frosted like a wedding cake.

Today I made one of my favourite cake recipes. Its a variation on a classic Madeira Cake. All that is needed is three eggs one part soft butter, one part sugar and one part self raising flour and the batter can be adapted to the size of your baking tins. I use a smallish loaf tin and the following recipe:-

Beat the butter and sugar until light and creamy. Blend the salt into the flour. Add one third of the flour and one egg and fold in then beat the mixture. Add the next third of the flour and the second egg and mix in as before. Add the baking powder to the last third of the flour, add it to the mixture along with the third egg, and some of the zest and the juice of the lemon. Beat the mixture until of a soft dropping consistency then pour into your baking tin. I sometimes grate some lemon zest over the mix before putting it in the oven. Cook in the middle of the oven on 180 for about 35-40 mins. If your Cake tin is bigger you may adapt the measurements accordingly. I have also used a clementine for a change and golden syrup on another occassion. It is a very useful and reliable recipe.

New Home For The Call Ducks

I have made a big decision about the Call Ducks and  they are now living at Sandwell Valley Park Farm. I think it was the right decision for both me and them but it was heart breaking nevertheless. My original white pair Puddles and Jemima have been with us since June 2006. They were hatched here under a Pekin hen and then brought indoors to be reared on until they were strong enough to live in the garden. My son had moved back home at the same time and so as they were at first in the same room they imprinted on him and would follow him round the garden and even sleep on his lap. They eventually had a duckling, Mylie, and they all lived in the garden together in a large rabbit hutch with the run of the garden during the day.

In 2009 I hatched a clutch of eggs in the incubator. They were all sold except for Rosie who had become attached to Mylie. In 2010 I hatched three Apricot drakes and then the next clutch produced five ducks, four whites and one magpie. Out in the garden Puddles and Jemima hatched One white duck and one magpie drake while Rosie and Mylie had one white duck. All this new life meant that we had fifteen ducks in all, nine girls and six boys. Whilst this was a perfect group our garden was far from perfect for them and I made my decision to find them a home all together.

After a bit of work we were able to take them all to live at Sandwell Valley Park Farm. After a few anxious days and nights we were finally able to visit the farm and see the ducks in their new home. What a relief! The place is beautiful and best of all we met Sue, who is the lady looking after them. She couldn’t be more perfect. She obviously loves the animals and has an empathy with them that shines out. We call her Merriweather because she is our fairy godmother and has made it all ok.

We have loads of jobs to do in the garden but rain has stopped play today. We have had torrential rain since the early hours of the morning so couldn’t carry on outside. We have come indoors and I am making Butternut Squash Soup.

Cut the butternut squash length ways and scoop out the seeds and the stringy flesh. Peel and cube. Cook with a little water until soft and put on one side. Cook the potato and onion until soft. Combine them all and mash to a smooth pulp. Add the stock cube disolved into a pint of water to the butternut, potato and onion. Season to taste and cook on on low heat stirring all the time or even put into a slow cooker on medium heat until you are ready to serve. Serve with crusty bread for a warming treat. I have seen recipes that add carrots, apple, orange or even curry but we like it simple.

I have finally had to put some of the Call Ducks out for sale. They are lovely but to be fair to them I don’t have enough room for them. Ideally they need plenty of grass and moving water. I am letting them go for ten pounds each so a bargain for someone.

I have bought two more roses for the side garden. They were an impulse buy at two for three pounds from Lidl. They are both Hybrid Tea. One of them is Rosa Pascali which I have bought before and am very pleased with. It is white with a lovely fragrance. The other one is new to me. Rosa Dame de Coeur has deep green leaves and large, rich, red flowers and as it was sold as a fragrant rose I am hoping for a strong perfume too.