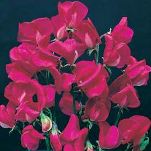 I planted twelve little plants from my last Sweet Pea sowing of Spencer Mix and have bought a few more seeds, 50p a packet from Alan Romans, to add to the obelisk. The first to be sown are the Pip Tremewan, named after the breeder. The second are Zorja Rose which I have grown before and saved the seeds but they didn’t come to anything. The first time I grew them they were beautiful and the scent was very special. I plan to sow ten of each and keep the rest for next year.

I woke up this morning to the sound of rain. We have had a couple of weeks without a drop  and have enjoyed rising temperatures and sunshine which have been welcome after the coldest Winter in a decade. Ideally I would want light rain overnight every night followed by dry sunny days but unfortunately nature isn’t controlled by a switch so we have to deal with what we get and in this country we are blessed with mild, changeable weather. However the sound of rain this morning was welcome. The garden and the allotment plot were dry and dusty which is not great for new plants and seedlings or the newly seeded lawn at home. We spent a couple of hours this morning at home in the garden then popped to the plots for an hour. The rain kept off and the hour turned into four hours. We sowed more seeds of Parsnip Hollow Crown and Carrot Nantes into the bottom bed. There was great excitement when we saw two asparagus spears peeping through already.

Rob put in some Peas Kelvedon Wonder in the bottom brassica tunnel. I had been swishing them for a few days and they were already germinated so should be off to a good start.  The Hurst Green Shaft that I put in the top tunnel are well up now and the Meteor are showing through too. Rob has moved the obelisk that I grow the Sweet Peas up and I have planted the Spencer Mixed raised from seed at home. They are now situated at the bottom of the plot by the seating area.We came home with another bunch of Raddish French Breakfast, my favourite. I shall have to sow more next time we go down. At home I have pricked out the Gardeners Delight seedlings and potted on some Alicante and Black Cherry.

Yoga is my latest passion. I have been thinking about trying it for years and done nothing about it but on Mother’s day this year Deb and Sean, my son and his partner, got me all enthused again. Deb has been going twice a week for about a year now and can’t recommend it enough. The lady that I was going to go to years ago, Marie, proved elusive and after much searching on the net and looking in the local papers I had all but given up when serendipity stepped in and I bumped right into her in Sainsbury’s. That was it. On the following Thursday night I presented my very stiff old body at her class and haven’t looked back since. I have been going twice a week and have made some lovely new friends as an added bonus. I feel so much better in myself after such a short time. It’s all about control, stretching and breathing and makes such sense for a lady of a certain age. Thanks Sean and Deb for the inspiration and the new yoga mat.

Hatha Yoga is a particular system of Yoga that focuses on the belief that purification of the physical body  leads to the purification of ha, the mind and tha, vital energy. Compared to the seated meditation posture it marks the development of asana, the full body postures now popular. wiki

Wednesday, April 14 – After weeks of reduced activity, Eyjafjallajokull volcano in Iceland erupted beneath its glacier ice cap, which by midmorning was spewing out a substantial stream of steam and ash. By midday the surrounding rivers had risen by 10 ft and a plume of ash had risen through the air to four miles in the sky. Guardian. 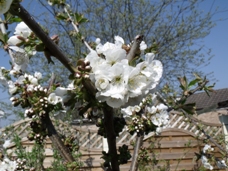 Here in my small world I have seen some beautiful dry days and signs of Spring everywhere. However 20,000 feet up the UK is covered by the volcanic ash cloud that has drifted over from Iceland. Down at the allotment the only things flying in the sky are the pair of buzzards that often glide and screech overhead as we are working. There have been no planes in the sky at all for about a week as flying conditions are dangerous in the ash cloud.  The small birds are oblivious to the dangers and are busy nest building and hopping about to catch the worms that we disturb when we are digging.

Monday 19th April – Gordon Brown announces that a Royal Navy Task Force of three warships, including the flagship of the fleet, HMS Ark Royal, will be dispatched to fetch some of the 150,000 British travellers stranded overseas. Telegraph

“Farmers in South Iceland are experiencing significant difficulties as a result of the Eyjafjallajökull eruption. There are great quantities of volcanic material in the atmosphere and ash deposits on the ground. There is also a risk of lowland flooding due to the volcanic activity being under the glacier.” – The Farmers Association of Iceland.

I feel so sorry for the Icelanders who are having to deal with this disaster while our governments seem to be more concerned by airport closures etc.

Jemima, our white Call Duck, is sitting on a nest of fertile eggs so I hope she has some luck this year. This is her second season and last year she only had one surviving duckling. Puddles, her mate is standing guard on top of their hutch and warding off all comers. We only have four call ducks now in the garden and things are much quieter and tidier. The second pair are Myley, Jemima’s baby and Rosie, one of the ducklings I hatched out last year in the incubator. They are living together and so far Rosie has six eggs in her nest. It broke our hearts to let the other calls and the runner ducks go but they are all now living in lovely places with loads of space and plenty of grass. We shall probably have to sell the ducklings if they hatch but it all helps to pay for food and bedding and the ducks will be much happier and content if they are allowed to rear a brood of their own. The ducks aren’t the only ones who are broody in the garden but as the chickens don’t have a cockerel with them there won’t be any chicks this year. 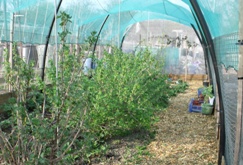 Rob’s first week off is over and we have been very lucky with the weather. Although the lack of rain has meant lots of  walking back and forth carrying full watering cans we have been able to get loads done on the plot and at home. Both the brassica tunnel and the new cage are fully planted now with sprouts, peas, onions, cabbage and cauliflower. The Asparagus is planted and the fruit tunnel has been tidied, a new path laid and the plants fed.

We have almost completed the digging of the beds and not many weeds are left now. Two loads of wood chip have been dropped and we have made good use of them to refresh paths. 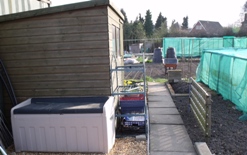 The salad tent has been secured and is now fully seeded with spring onions and lettuce.

As the soil on the outside beds become finer we are getting some seeds in and to date have beetroot, onions, celery, a bit early I know, carrots, parsnips, raddish, spinach and chard. We have to prepare a bed for the sweetcorn which should go in next month and another for some overwintering brassicas. The bean trench has had another dig over and looks ready to receive the plants as soon as all threat of frost has passed. The carrot bin has been sown with a mixture of varieties and the courgette bin has had three courgette plants put in under a polythene cloche. All the potatoes are in both in the ground and in bags.

At home the tomatoes and cucumber are planted on into their second pots and a start has been made on the squash and pumpkin seeds which are at the second leaf stage. The melons are not doing too good again this year but I will persevere with them as we have made a hot bed for them at the plot.

Today we planted up the new brassica cage with twenty Brussel Sprout plants and fifteen Cauliflowers. We gave them a feed of blood fish and bone and circled them with lime and slug pellets. I tidied up the salad tent and sowed three rows of spring onion and a row of salad leaf. I also sowed a largish pot with coriander seeds. Apart from being a useful herb they look and smell good.

As the weather has been dry for days on end we gave everything a good water too.