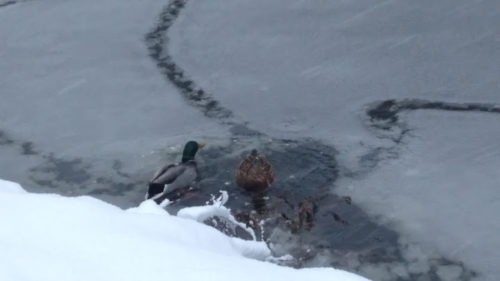 Life, for the majority of us, is littered with tragedies and mine is no exception. Like most I have tried to count my blessings and carry on. However I have been persuaded  to get some help in the form of Kalms. Update – One month on and I have to say that the Kalms have definitely helped me to get some undisturbed sleep. I only take one at bedtime and as if by magic the flashbacks seem to be much less and some nights not there at all.
All contain Valerian Root, Gentian and Hops.

Valerian is a perennial flowering plant, with heads of sweetly scented pink or white flowers that bloom in the summer. Its flower extracts were used as a perfume in the 16th century. Valerian has soothing, calming properties which counteracts anxiety and has been used traditionally to promote sleep. Valerian, also known as Valeriana officinalis, is a flowering plant native to Europe and Asia. The root of the plant has long been used in herbal medicine for a variety of conditions such as sleeping difficulties, digestive complaints, anxiety and headaches.

Gentian, one of the bitter herbs, has been used by herbalists for over two thousand years to help stimulate liver function. It was named as a tribute to Gentius, an Illyrian king who was believed to have discovered that the herb had healing properties. Gentian root herb comes from the yellow gentian plant, Gentiana lutea. This European native produces wrinkled, light to dark brown roots commonly used to make health supplements.

The hop first attracted attention as a medicinal herb in early Egypt.  It was later used in Europe to treat liver disease and general digestive complaints. Hops have a long history of use in folk medicine where they have been used to treat a variety of complaints. For example, hops are thought to have a sedative action and have been traditionally used in hop pillows for the relief of insomnia. Also, hops have been used as herbal antibiotics and were incorporated into wound salves and anti-inflammatory compresses. Hops also have a long-standing reputation for their ability to affect women’s hormonal balance, being used in hop baths to treat menstrual disturbances. The list continues, with hops being reputed to alleviate migraines, earache, bed-wetting, leprosy, travel sickness, digestive problems, kidney stones and coughing. With so many cures ascribed to one plant, it is easy to see how many viewed them as old wives tales. However, over the last few years there has been a major change in attitudes. New technologies have been developed which allow the rapid and relatively inexpensive testing of chemicals both synthetic and natural as cures for chronic diseases. As a result, pharmaceutical researchers have taken an increased interest in herbal remedies in their hunt for new medicines.

Too Close For Comfort

This vixen is being seen in a garden very close to mine on a regular basis so the chickens have been confined to the run for the foreseeable future. They are showing signs of boredom already but at least they are safe. The lady who is feeding the fox assures me that she won’t be interested in my chickens as she is well fed however, it is a natural instinct for a fox to kill a chicken and this will be even more true come the spring when she has cubs to feed. I love to see foxes and think they are  beautiful creatures but I know that I need to be really vigilant to keep the hens safe from now on. 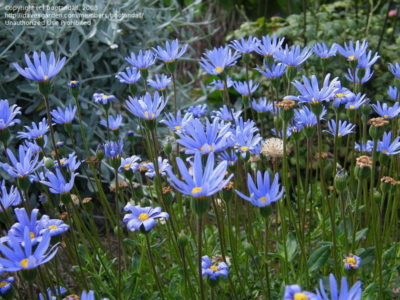 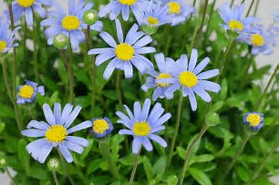 This year Laura has introduced a new little gem to our flower collection in the form of a South African,  groundcover Marguerite. As well as being a pretty blue flower, the foliage is attractive and seems sturdy. Apparently although Felicia has a somewhat fragile appearance, this durable, pest-resistant plant requires little maintenance. Once the plant is established and shows healthy new growth an occasional watering is sufficient. Water deeply to saturate the roots then let the soil dry before watering again. Deadhead regularly to prevent the plant from going to seed for as long as possible. Prune the plant lightly when it begins to look tired in midsummer. The fluffy seed heads appear as late as November and can be collected or left to self seed. The common name of this little beauty is the Blue Kingfisher Daisy. I like it.

Update 8th April 2018 – Today I have sown seeds collected last Autumn from this pretty Marguerite. I am hoping to produce a few plants to place around the pond this year.

Method
For best results prepare your steak early and leave to marinate. Coarsely crush the peppercorns with a pestle and mortar.  Take a shallow dish large enough to hold your steaks comfortably side by side and pour 1 tablespoon of olive oil mixed with half a clove of crushed garlic into the dish. Coat each steak evenly on both sides with crushed peppercorns, pressing them in firmly. Lay the steaks in the dish and spoon the other tablespoon of oil and the rest of the garlic over them. Cover with Clingfilm and leave them on one side for several hours, turning them over once.
To cook the steaks use a thick based frying pan. Place it over a very high heat and let it preheat the hotter the better. Sear the steaks quickly on both sides for about a minute each side. Then lower the heat and cook them how you want them. 1 minute before the end of the cooking time pour in the wine and let it bubble and reduce down to a syrupy consistency to about one third of its original volume. This whole process will be very quick. Sprinkle with salt and serve the steaks as quickly as possible with the wine sauce poured over. Serve with chipped or sautéed potatoes and green salad, beans or peas. 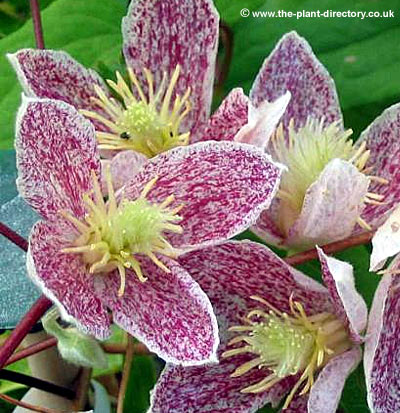 Clematis Cirrhosa Freckles is an evergreen variety that flowers from November to February. Freckles can reach a height of 12′ . This variety introduces a bit of colour and scent into a Winter garden. It is happy in a large container with support and some protection from strong winds. It is a group one Clematis so needs no pruning just keeping tidy. It carries attractive silky seed heads and green foliage with a bronze tint.

Scented, bell-like, cream winter flowers heavily speckled inside with reddish-brown freckles and glossy, dark-green leaves. This evergreen clematis is ideal for training over a sunny pergola or arch. This is the best way to appreciate the distinctive freckle-like markings, which are less visible when the plant is grown against a wall.  No routine pruning is necessary. If the spread of the plant needs to be restricted prune immediately after flowering, cutting back overlong shoots to healthy buds. Apply a slow-release balanced fertiliser and a mulch of well-rotted garden compost around the base of the plant in early spring.

This recipe used to be a family favourite when the kids were all young. It’s a soft, moist fruit cake that can easily be adapted to become a celebration cake with the addition of treacle, alcohol, cherries etc. Another plus is that it does keep well if wrapped in foil or cling film.  I have the inclination to give it a go again.

Add the water, sugar, fruit and fat to a saucepan and bring to the boil stirring to keep from sticking. As soon as the mixture reaches boiling point turn down to a simmer and cook for about 20 minutes. At this point the mixture will be evenly mixed and the fruit plump and juicy. Remove from the heat and leave to cool. Stir occasionally to stop skin forming on top or cover with cling film or greaseproof paper. When cool gradually add the beaten eggs, flour and baking powder, folding in and making sure the ingredients are evenly distributed. Bake in the centre of the oven for about an hour and a half. It does help to line the cake tin with greaseproof paper or as I do, wipe the tin round with margarine and shake flour so that the inside is coated evenly. At this point you could sprinkle with granulated sugar, decorate with almond slices or put a few candied peel slices on top. This cake also takes well to decorating with icing. All in all, a good all round stand by. My sort of cake. 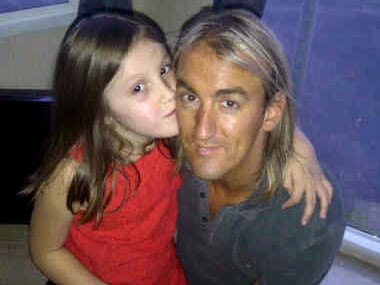 The subject of Adam’s ashes has reared it’s head again and I am no nearer to deciding what to do about it. Up until today the blue box containing all that remains of my beautiful boy has been sitting in the living room underneath his photograph. However, I am aware that I am not the only person with an interest in what becomes of them. He has three children and their two respective mothers, two brothers and a father, all of whom have genuine rights when it comes to making a decision about this difficult problem. I am his mother, This was his home, Where he is now is virtually the same place where he was set down when I brought him home from the maternity ward in a little blue carry cot. I don’t think I am ready to let him go yet. I still haven’t come to terms with the way he died  and I think that that is the crux of the problem.

Fourteen billion years ago the whole thing was begun.
Time itself came into being, the clock began to run.
And in the crucible of space, all there is, was born.
The building blocks of all we know from some galactic storm.
Collapsing stars formed elements, the elements combined
To form the substance of it all, the earth, the trees, mankind!
So look into the midnight sky, creation on parade. . .
For what you see in starlight is the stuff from which we’re made.
For we are in the universe, The universe in us.
The two are indivisible. A thing most beauteous.
So hear the song of nature. The song that all things sing.
For we are truly stardust, everyone and everything.

Well, I’m told that Sainsbury’s are selling off the pumpkins left over from the Halloween mayhem. Laura is hoping to bring us back a bargain for 10p. I shall cut up the flesh and cook in a little water until soft then use my blender to make a puree. Add a chicken stock cube dissolved in boiling water and season to taste, Pumpkin is very bland so any type of flavouring could be added, even curry powder, but I prefer it as it comes with a shake of black pepper on top and plenty of crusty bread. I have added a potato and a stick of celery before when cooking the pumpkin flesh, it just depends on what I have in the fridge at the time. The Delia Soup Collection advocates roasting the chunks of pumpkin in the oven first. I haven’t tried that yet but may do one day.

I large pumpkin deseeded and peeled

Chop up the flesh, rinse and put into a saucepan with a little water

If preferred add a potato, carrot and chopped celery at this point

Drain and mash or blend to make a puree

Dissolve a chicken or vegetable stock cube in boiling water

Serve hot with a chopped chives or parsley garnish

Sprinkle with black pepper and serve with crusty bread

The Last Kiss Of Autumn 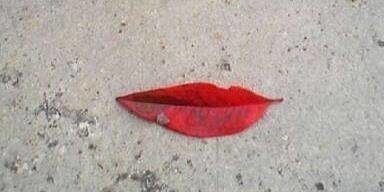 Not one of my photographs but I don’t know who to credit the copyright to, It  just seems to send that message,