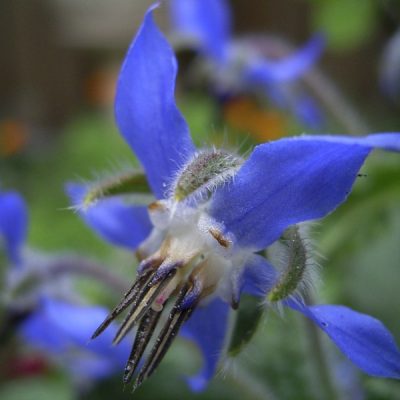 I have grown this interesting plant before when we first took on the allotment. I sowed Borage seeds directly into the end of the bean trench and it grew and grew and grew. Personally I liked it so I have bought new seeds from Higgledy. Rob didn’t like it as it tried to take over the allotment. It is a big plant that attracts bees and other pollinators which is why I think it should have a place in both the garden and the allotment. It does need managing though. Direct sow into the ground in mid April and through May. You can also sow in August for flowers the next spring. It’s 26th April and I am sowing some Borage seed in the side garden today.

Borage, also known as a starflower, is an annual herb in the flowering plant family Boraginaceae. It is native to the Mediterranean region and has naturalized in many other locales. It grows satisfactorily in gardens in the UK climate, remaining in the garden from year to year by self-seeding. The leaves are edible and the plant is grown in gardens for that purpose in some parts of Europe. The plant is also commercially cultivated for borage seed oil extracted from its seeds. Starflower Oil is taken from the Borage officinalis seeds,