I bought a dormant root of these rare Chocolate Cosmos online from Farmer Gracy in the Netherlands and have planted it in moist compost today. I am optimistic that it will burst into life but at present it looks very dead. Many years ago these used to grow wild in Mexico but are said to be extinct now. They have a strong chocolate smell I’m told. We shall see, I have bought seeds of a White variety, Purity, from Higgledy but haven’t sown them as yet. I believe Purity is a taller variety than Chocolate. I have grown these from seeds before in the flower bed at the allotment and they gave us a wonderful show of white, pale pinks and mauve. This variety of Cosmos is Half Hardy and flowers from June to September. The advice is to cut down after flowering and store the corms in a frost free environment until the following year. 11th April and still no sign of the Chocolate Cosmos from Farmer Gracy. I contacted the company and have been told to give it another month. I shall do that but feel a bit disappointed as the bare root purchased from Wilkinson’s for £2 is showing good growth. They were treated the same and are sitting next to each other in identical pots. 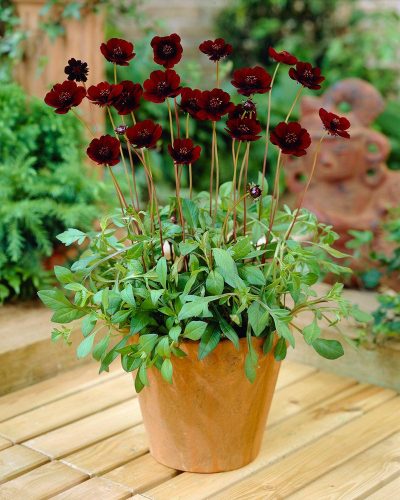 The wonderful Cosmos flower is native to meadowland and scrub  in Mexico. They have naturalised in USA and South America. Though perennial plants in their native land they are not in the UK and should be considered as annuals.

The chocolate Cosmos from Farmer Gracy never came to anything so I was refunded, however, the cheap one from Wilko made a lovely plant. I have read that this variety should be treated as an annual but, after taking a couple of cuttings and some seed heads, I have brought the pot indoors to overwinter in the porch. The flowers were really intense in colour and though smaller than I anticipated I liked them very much.