I have quite a large established group of white Japanese Anemone, which have developed from a couple of cuttings given to me by my Sister Cath about ten years ago. They are a bit crowded in now with a hibiscus tree and a climbing rose so I will try to propagate a few more in pots so that I can tidy up the group. The one I have is a single pure white flower with golden stamens and dark foliage. It looks like the variety called Honorine Jobert.  According to Carole Klein the variety has been around for about 150 years. It was a sport, spontaneous offspring, from the more widespread pale pink Anemone x hybrida, which was raised at the Royal Horticultural Society’s garden at Chiswick in 1848. The white-flowered sport occurred 10 years later in France on a plant that had been imported from England. Soon afterwards, Anemone ‘Honorine Jobert’ made the trip back across the Channel. 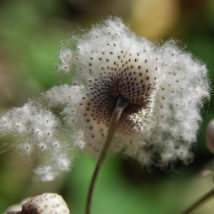 I planned to collect seed heads but even though these plants have been in my garden for so long I had never registered the seeds so I googled to find that the lovely green seed heads evident now will turn to fluffy seed which disperse themselves around the garden. I asked myself why then isn’t my garden covered in these beauties. So, I am now on seed alert as I have read that the transformation happens quickly. Update: I have collected  the seeds today 14th November. I have dropped some here and there in the garden and saved some in a brown paper envelope.

Propagation by division should be done as they start into new growth in the spring. Most nurseries raise more plants by taking roots cutting. Lift the plant in late Autumn and remove some of the thin brown roots. These are cut into sections and laid onto compost before being lightly covered. These can take months to begin to grow. These thread-like roots not only allow the plant to spread, they make it hard to eradicate a plant once it’s established. So make sure you plant your Japanese anemones where you want them as, like oriental poppies, they are difficult to eradicate. Japanese anemones can also be divided as they start into new growth in the Spring. As well as rounded white flowers it also sets seed readily. Each seed head is a little sphere held at the end of a stem. As the heads ripen they expand and their outer surface becomes soft. Eventually they erupt and each seed is carried in its own woolly overcoat to pastures new.