Parsnip seeds are wafer thin and very light so only sow them when there is no wind. The seeds only last six months so choose your supplier carefully. Parsnips are notoriously difficult to germinate so you may want to pre-germinate the seeds before sowing them. Pre-germinating seed starts them into life before you sow them which is especially useful with parsnips. The steps for pre-germinating parsnip seed are simple. Start the process off in the third week of April which is a week or so before you would normally sow the seed directly outside. Place the seeds on a damp paper towel in a bowl or container and gently pat them down. Cover with cling film to prevent moisture loss and place in a moderately warm area inside the house. Keep the paper towel moist at all times. The seeds will take seven to ten days to germinate. if they haven’t geminated after three weeks using this method then suspect that they never will. In this case buy new fresh seeds from a reputable supplier and start the process again.

Germinated seeds will sprout a tiny white root which indicates they are beginning to grow. The roots are difficult to see on white paper towels so keep a good watch on them at least once a day after the first three days. Immediately the seeds have germinated sow them. The best solution is to take the paper towel with the pre-germinated seeds outside to where they can be sown one by one.

Parsnip seeds need a minimum soil temperature of 41°F / 5°C to germinate but the ideal temperature attainable in the UK is about 53°F / 12°C which occurs most years in the last week of April. Stick to that date, ignore any advice about earlier dates and you won’t go far wrong.

Use the edge of a hoe or a trowel to draw a groove in the prepared soil to a depth of 2.5cm / 1in. Sow one seed every 5cm / 2in, if you have more than one row the rows should be 45cm / 18in apart. Draw the soil over the seeds and water well.

The seeds will take a couple of weeks to appear above ground, longer in some cases, so make sure you mark the rows carefully to indicate where they are sown. A line of string will do fine. Some gardeners sow radish seed along side the rows which does two things. First, the radish seedlings will appear much sooner than the parsnip seedlings which will clearly show where the parsnips are. It will also give you a crop of radish well before they are able to interfere with the parsnips. Whern they appear thin out to 8″ apart. 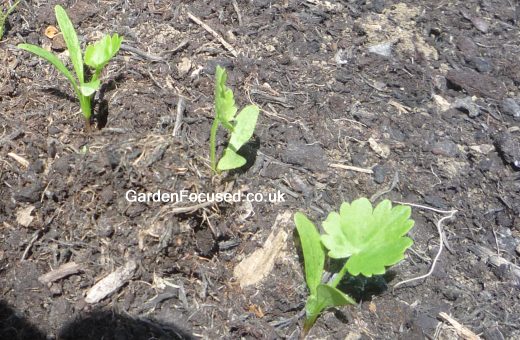 Parsnips develop long tap roots so they are unlikely to die from lack of water. Watering in dry conditions however, will help stop the roots from splitting.

Parsnips grow best where nitrogen based nutrients are slightly on the low side. A feed of blood, fish and bone fertiliser every other month to provide trace elements and other nutrients. Your parsnips will look after themselves from now on until harvest time. Regular weeding is the only job required.