Today I have sown all of the Aubergine seeds left in my collection. Aubergine Mohican and Aubergine Black Beauty.  The Mohican is a dwarf white variety while the Black Beauty produces a standard sized dark purple fruit. This is another experiment in grow them or throw them using up old seeds. Aubergine have a five month growing season and require full sun and as much heat as possible as they originate in hot countries. I have grown these vegetables successfully before but they are difficult and when I harvested them I didn’t know what to do with them.

How to Grow Aubergine From Seed – Gardeners World 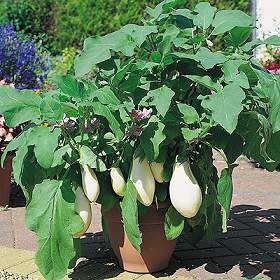 I bought these seeds, Aubergine Mohican, F1 Solanum Melongena, in 2007. Ten year old seeds won’t stand much chance of germination in my opinion but I feel that I have to give them a go. Mohican look more like an egg than any other egg plant that I have seen. I tipped a few on to my hand, eleven, and have put them into a pint pot of moist compost and sealed them in a polythene bag. Watch this space!!! I have tried to grow these strange plants many times over my gardening years with mixed success and there are several mentions on old blog posts. If I remember rightly they need heat to germinate so I have put the pot next to the radiator.  My old note to myself way back was treat these seeds the same as Tomato. The first time that I ever sowed these they germinated after two days so my disappointment may arrive swiftly.

History – Native to India, this member of the lethal, deadly nightshade family is kin to tomatoes, peppers and potatoes. It was brought to Spain by the Moors more than 1,300 years ago. Botanists in 16th century Europe called eggplant mad apple because some believed it made people insane. In medieval Europe it was considered useful as a love potion. There is a subtle connection there I think.

Today I sowed four Courgette, Black Beauty, into modules and put them in the cold greenhouse at home. Hopefully they will make four good sized plants and I can put them out in pots in May at the allotment. Despite what the name implies they are dark green and not black at all. I have also sowed four Aubergine, Violette, which will eventually be in the lean to with the tomatoes and cucumbers.(message to myself: next year sow courgette seeds in a bigger pot, the modules just aren’t big enough for these sturdy seedlings. Both courgette and aubergine need heat to germinate. Treat aubergine seeds like tomato seeds) Update on the seeds planted on the 15th. The red cabbage and the Jersey walking sticks have germinated but no sign at all of the others yet.