Growing Cleome From Seed for 2018 Colour

Today I sowed seeds of Cleome Spinosa indoors in moist compost. I have white Helen Campbell, Violet Queen and Rose Queen and hope to have all of these striking plants in the back of the borders this year. Although I have put some seeds to start indoors my main plan is to sow the seeds directly into the garden at the end of this month and in early May. Last year was the first time that I grew Cleome and I was blown away by the beauty of the spidery flowers. I only had Violet Queen last year and regretted not having the other colours. Another thing I plan to do this year is to pinch out the central shoot. This happened accidentally last year when the first tall spike snapped off in a strong wind and I was amazed at how many new flower heads grew as a result. Another advantage of this plant is  how easy it is to collect seeds. Last Autumn I scattered quite a lot of seeds, saved from the Violet Queen, around the garden so I am hopeful of new seedlings come May.

I am hoping that I will never need to sow any more seeds as if this years plants self seed as they should this tropical looking herbaceous plant will become a permanent feature of my summer borders. As this flower is extremely attractive to beneficial insects I shall tell Rob to get some going at the allotment too. Grow Cleome in groups rather that rows or make a big splash of colour with container grown plants.

Cleome Violet Queen will be the next seeds to go into some damp compost. These half hardy annuals were £1.99 for 200 from Higgledy who recommend sowing between January and March indoors. Best sown on the surface of moist compost and can take up to four weeks to germinate. I shall sow just twenty of them tomorrow 19th January. It seems that these plants can grow as high as six feet so I shall have to be careful where I put them. Eye catching and strongly scented, the deep violet flowers and palm like leaves of this beautiful plant will add a tropical look to the late summer garden. so say the people at Crocus.com. Twenty tiny seedling are now fighting for survival on the window ledge. Germination was great at 100% and took only ten days!. Let’s see if I can get them through to flowering.

Cleome spinosa Violet Queen is a sumptuous purple, which looks good with almost anything, particularly good with verbenas, dahlias and sunflowers. Cleomes are an elegant, very long lasting annual,  flowering longer than all the other half-hardies. Sow early. The only downside to Cleomes are their thorns. Information from the Sarah Raven site.

I have bought new seeds from Seekay of two other colours of this beautiful flower. On doing a bit of research I see that I can sow these directly in the ground now, May/June so I am looking forward to doing just that. The two new varieties are Helen Campbell, White and Rose Queen, a subtle pink. 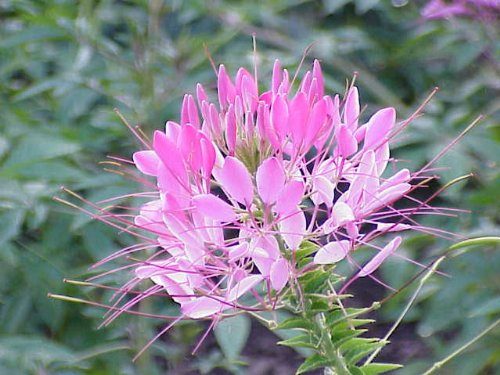 Despite it’s recent revival in popularity Cleome hassleriana ‘Rose Queen’ is actually an heirloom flower having been grown in gardens since 1817. A beautiful variety with deep, rose-pink flowers that fade to light pink. The large, open, airy flowers have a strong scent and bloom throughout the summer until frosts.  Eye-catching spidery flowers and palm-like leaves add a tropical look to the late summer garden. Cleome are very easy to grow are generally free of pests and considered drought tolerant. Despite that fact they grow their best in moist but well drained soil and full sunlight. The spidery flowers make attractive cut flowers and the seed heads can be dried and added to bouquets.  Frost and cold winds are lethal to this elegant South American annual. If you wish to start them early in the year do so under glass and only plant out after the danger of frosts has passed. Sow indoors in April or outdoors May to June. Cleome like good light levels and germinate quickly if sown quite late. Start them in April or early May. If planted too early the seeds will not germinate and may rot. Sow indoors 4 to 6 weeks before last frost, or sow directly where they are to flower after all danger of frost has passed.

Cleome is a genus of annual flowering plants with 170 species. Cleomaceae are a small family of flowering plants in the order Brassicales comprising about 300 species in 10 genera. Cleome are native to southern South America. This heirloom flower has been grown in gardens since 1817. The genus name Cleome is derived from an ancient name of a mustard like plant, in reference to its seed pods. The species hassleriana is named after Emile Hassler 1864-1937 a Swiss botanist and plant collector. The synonym Spinacia is taken from the Latin spina, meaning a prickle or thorn. Because of their unique flower clusters, these blossoms got the nickname spider flower. Although most flowers have a multitude of meanings cleome one. An old-fashioned expression that asks the recipient to elope or run away with the giver.

The white Cleome Spinosa Helen Campbell looks good in large drifts on its own or intermingled with white cosmos Purity. It’s 16th May and a warm rainy day so I am about to go and sow seeds of both in the white border. The advice is to put seeds on the surface of the soil as they need light to germinate.