This years courgette seeds have all been chitted using the damp kitchen towel method. The Tuscany were virtually climbing out of the box so I have popped them in a bit of compost to stretch out. The rest are behaving normally so I expect them to germinate in a few days. I have decided on two of each and am crossing my fingers that they don’t get drowned by exceptionally heavy rain like last years. If they all thrive that will be twelve plants which is too many even though the varieties vary quite a lot with one being a yellow variety and another a round type. I will face that dilemma when I come to it. The two Tuscany are already potted on into 7″ pots and the Zephyr will be ready tomorrow. The rest, however, are yet to show any sign of life. I have taken them out of the chitting box and put them into compost but I may have to try new seeds.

Courgettes are easy to grow with two plants producing plenty enough for most families. Best picked small for best flavour, these plants are also very prolific. Courgettes are not frost hardy which means plant them out in June when the risk of frosts has passed. You can sow Courgettes either inside or outside depending on the weather where you live. I think it’s safer to sow indoors and plant out later. I prefer to chit seeds and then, when they have germinated well pop them into a pot of moist seed compost. Courgettes will also be fine in an unheated greenhouse or poly tunnel but you must protect them from frost.

After about 3 weeks courgette seedlings will have used up most of the nutrients in the small pot of seed compost but it will still be too cold to plant out. Pot the plants on into a larger pot with fresh compost. 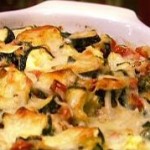 We had the usual glut of courgettes this year and I have used some of them in this recipe, given to me by Marie, my Yoga teacher.

Pre-heat the oven to 200. Heat the oil in a pan and add the sliced courgettes and mushrooms and cook through for a few minutes until golden. Add the tomatoes and heat through. Arrange the mixture in a baking dish and sprinkle over the oregano and cheese. Season to taste. Cover the dish with foil and bake in the oven for about fifteen to twenty minutes. Remove the foil and finish off under the grill. I have tried this replacing the cheese with Carbonara sauce. It is lovely. Thanks Marie. 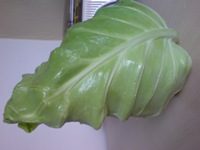 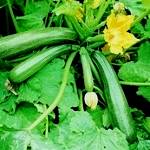 This afternoon I have sown four seeds of the Courgette All Green Bush. They are in a 7″ pot with a polythene cover and standing on the computer box for a little bottom heat. Germination update – these seeds germinated very well with three out of four making a good plant so thumbs up for Johnsons seeds.

A versatile variety that yields dark green tender fruits in abundance. Can be harvested as courgettes or left to develop into marrows. info from Johnsons Seeds

Today has been a sad day as I have had to cull the two lame Apenzeller chicks. The remaining three cockerels are strong and will be going to a new home soon as we can’t keep boys here. On a more positive note the first of the Buff Plymouth Rock chicks has hatched and it looks very healthy.

I have sown my last single seed of Courgette Black Beauty which has done very well for us in the past three years. Germination should take 7-14 days and it should be ready to plant out in early May. It is a very prolific plant amd fruits need to be picked when small for the best taste. If we have had problems getting to the plot in the past we have found some fruit to have reached 1′ in a very short time.

It has been a while since I wrote on the weblog but there hasn’t been much to report. The weather has gone from one extreme to another and there is a definite hint of Autumn in the air already. We are getting loads of runner beans every visit now and we have been amazed at how prolific the four courgette plants are. Every time we go to the plots we bring home a carrier bag full of beans and at least two courgettes which seem to grow overnight. We had never eaten courgettes before but luckily we do enjoy them aswell as being able to give some to family and friends. We continue to dig up the potatoes and it seems like about 50% are blight free so not as bad as we thought and we haven’t had to buy any. The tomatoes have produced a few fruit but on the whole both the tomatoes and the cucumbers have been very disappointing. We shall have to try harder next year.

The pumpkin plant that survived is now enormous with quite a few smallish fruit and one very large beautiful golden orb which Rob has sat on a piece of carpet and looks very grand. The butternut squash and the one surviving melon plant are growing slowly. The lettuce plants have been very nice but have come to an end before the tomatoes have got started so some problems in the planning there.

Both the baby corn and the big sweetcorn plants are thriving with cobs already swelling on the bigger plants so we are hoping for a good harvest from them.

We heard that we got 78 points in the local council competition but don’t really know what this means and so as we have received no congratulatory phone call we must assume that the judges did pop their heads into the lean to on that dreaded judgement day and we came out bottom of the class. Ah well.

Today I sowed four Courgette, Black Beauty, into modules and put them in the cold greenhouse at home. Hopefully they will make four good sized plants and I can put them out in pots in May at the allotment. Despite what the name implies they are dark green and not black at all. I have also sowed four Aubergine, Violette, which will eventually be in the lean to with the tomatoes and cucumbers.(message to myself: next year sow courgette seeds in a bigger pot, the modules just aren’t big enough for these sturdy seedlings. Both courgette and aubergine need heat to germinate. Treat aubergine seeds like tomato seeds) Update on the seeds planted on the 15th. The red cabbage and the Jersey walking sticks have germinated but no sign at all of the others yet.