I bought the seeds of this Cucumber, Long White, from T&M way back and have had several attempts to grow them without any success. They were £1.99 for 25 seeds and there were ten left in the foil packet so I have put them all into some damp compost, enclosed the pot in a polythene bag and sat it on my computer box for a little bottom heat.  This is my first sowing of the year. I have not been enthusiastic this year about seeds and sowing but I have nothing to lose with this as the seeds are here and its either sow them or throw them. I think it will be the same story with most of my seeds as I have only bought parsnip seeds for the allotment this year as these are well known for not staying viable over time. The allotment is now Robs domain any way as I will probably concentrate on the house, the garden and the chickens. Update 18th February – One seedling through at 8 days.

This year I am going to try and chit Cucumber seeds. I have put four each of White Wonder from Seekay and Long White from T&M in some damp kitchen towel and into a plastic food box. It is sitting on the computer box for a little warmth. They don’t usually take long to germinate any way, about 7-10 days. I have grown the Long White before and have yet to see a white Cucumber. Last year produced the best plants but they were destroyed following the torrential rain that we had here. I have prepared a 7″ pot of moist compost ready for the germinated seeds. The White Wonder are new seeds. Well, no luck with chitting so I have put them directly into pots. I’m worried now that I may have spoiled the seeds. Hope not as they are quite expensive as seeds go. The T&M Long White were £1.99 for 15 seeds. Seekay White Wonder were 20 for 65p. 10th February – all of the White Wonder are about two inches high but only one of the Long White through yet. (7 days) Having got to the end of April and only two seedlings left I have sown another pot of the long white today. The best plant, the Long White, got killed off by a frost when I put it out too soon and the other two, White Wonder, which are still inside, look very feeble even though one of them is already in flower. Well, at the end of the season we had no harvest from the Long White and though there were two strong looking plants from the White Wonder we only had two very small fruits. I’m not sure that I shall have another go next year. Time will tell.

This Half-hardy Annual, Greenhouse type Cucumber Long White is not just a novelty. The firm flesh is sweet and juicy with a pleasant tang that will add flavour to your salads. The tender, white skins are so thin that they won’t need peeling. This attractive variety is a good cropper when trained against supports in the greenhouse. Height 9′
The White Wonder are described as an excellent variety that produces creamy white fruits that reach approx. 20cm.
https://www.thompson-morgan.com/how-to-grow-cucumbers
[amazon_link asins=’B00HHAIECC,B008CNXNLK’ template=’ProductCarousel’ store=’citychic-21′ marketplace=’UK’ link_id=’6b0b7cf4-171f-11e8-bfbc-bb51a395d461′]

After all my effort this years trying to raise seedlings for cucumber I have had to give in and buy seedlings from the nursery. I chose two sturdy plants of Femspot an F1 hybrid which I am assured will be successful. I have planted both in the lean to and they tower over my little seedlings which although green and healthy are very small so far. Cucumber Femspot is an F1 Hybrid cucumber, one of the best selling varieties in the UK. The plants are really strong growing, earlier cropper than most other cucumbers. You can enjoy the bitter free, ribbed fruits all summer long. Ideal greenhouse crop, but can be grown outside too in a sunny, sheltered spot in the garden or in your allotment plot. Femspot has proved to be one of the best all female varieties for outdoor production.

I have sown four each of Cucumber Marketmore and Lemon. They are previous years seeds so it will be interesting to see what results I get with germination. I have put the pots into a polythene bag and stood them on the computer box for a little heat. Marketmore is a basic cucumber like we can buy in the supermarket but Lemon is a little different. Both are well worth growing. The Lemon is a little sweeter than most and is quite hardy so can be grown out on the plot once all threats of frost have passed.

We spent a couple of hours at the plots this afternoon. The weather was warm and sunny and the ground was workable so we did a lot of weeding. Still back breaking work but easier than when the ground is dry or heavy with rain. Rob dug up a few rows of potatoes and we emptied three bags too so we came back with quite a haul. They seem ok as far as the Blight is concerned so lets hope they store ok. This evening I cooked some Charlotte and they were very good.

We cut another cucumber from the Carmen plant and though they are few and far between the quality of them is brilliant. We also cut one of the Butterhead lettuce. Pity the tomatoes are still not big or red enough to eat. The outdoor tomatoes seem to be getting the first signs of Blight with the young fruit turning black. Very sad. The runner beans were loaded and I picked a large box full as well as giving Frank and his wife quite a few as his were a bit late going in and are only just starting to produce. I pulled a few of the Rainbow carrots too. There seem to be plenty of snails, earwigs and wood lice having a go at everything, especially the brassicas and the white fly is starting to show itself again. We brought home a couple of cabbages and found one that was so nibbled we had to throw it on to the compost heap. The pumpkin plants are rampant and covered in yellow globes of varying sizes and are a reminder that Autumn will soon be here.

Remember that little cucumber seedling? Well look what I found. 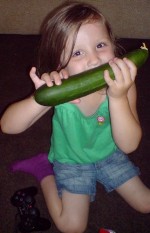 Torrential Rain and More to Come.

After a day of torrential rain the weather finally cleared up enough for us to pop down to the plots and install the second Cucumber Carmen in the lean to. The first plant is still surviving despite the cold spell we have had. We had a walk round to check on everything and so far no disasters and all the mini greenhouses are is still standing. We bought home the first of the pointed cabbage and some chard. Most of the seeds we sowed are through and the potatoes are doing really well. Rob is off work next week so we hope that the weather will allow is to complete the new fruit cage, plant the runner beans and get some pumpkins and squash into the ground.

Back at home the melon seedling have been turfed out of the broody box to make way for seven new chicks, the final count of the hatch is two Pekins and five Orpington bantams. There is still a lot of potting on to do as the seedlings of pumpkins, butternut squash, tomatoes, lettuce, sweet corn, melons and pak choi are all crying out for attention.

Libbie and her Cucumber Seedling 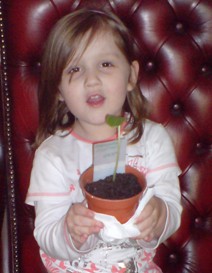 Libbie with the cucumber she sowed last Wednesday.

I am determined to have a more successful crop from this cucumber this year. I plan to put the plants on the least draughty side of the lean to with some extra protection as I have read that draught can be a killer for cucumber. I have read somewhere that John Innes number 3 compost is the best mix so I shall put three mounds of that in readiness along the lean to border. I shall bury an upturned plastic bottle with the bottom cut off alongside the mound so that water goes directly to the roots in order to avoid neck rot. I am sowing the first seed this week and then one in April and one in May. I have three seeds left only. The first seed will be sown in a small pot of moist John Innes seed sowing compost and given a bit of bottom heat. Germination should be within 7-10 days. Update – seedling through today at 4 days and on Libbie’s fourth birthday. She sowed the seed so I hope she brings it some luck. https://www.thompson-organ.com/seeds1/product/538/1/