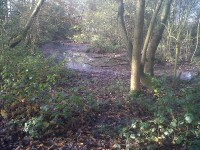 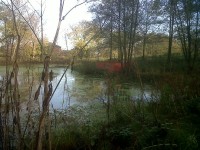 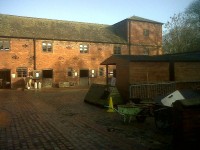 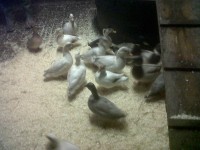 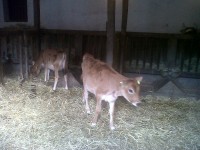 New Home For The Call Ducks

I have made a big decision about the Call Ducks and  they are now living at Sandwell Valley Park Farm. I think it was the right decision for both me and them but it was heart breaking nevertheless. My original white pair Puddles and Jemima have been with us since June 2006. They were hatched here under a Pekin hen and then brought indoors to be reared on until they were strong enough to live in the garden. My son had moved back home at the same time and so as they were at first in the same room they imprinted on him and would follow him round the garden and even sleep on his lap. They eventually had a duckling, Mylie, and they all lived in the garden together in a large rabbit hutch with the run of the garden during the day.

In 2009 I hatched a clutch of eggs in the incubator. They were all sold except for Rosie who had become attached to Mylie. In 2010 I hatched three Apricot drakes and then the next clutch produced five ducks, four whites and one magpie. Out in the garden Puddles and Jemima hatched One white duck and one magpie drake while Rosie and Mylie had one white duck. All this new life meant that we had fifteen ducks in all, nine girls and six boys. Whilst this was a perfect group our garden was far from perfect for them and I made my decision to find them a home all together. 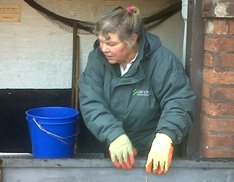 After a bit of work we were able to take them all to live at Sandwell Valley Park Farm. After a few anxious days and nights we were finally able to visit the farm and see the ducks in their new home. What a relief! The place is beautiful and best of all we met Sue, who is the lady looking after them. She couldn’t be more perfect. She obviously loves the animals and has an empathy with them that shines out. We call her Merriweather because she is our fairy godmother and has made it all ok. 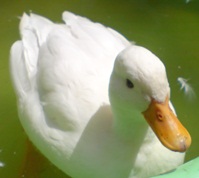 I have finally had to put some of the Call Ducks out for sale. They are lovely but to be fair to them I don’t have enough room for them. Ideally they need plenty of grass and moving water. I am letting them go for ten pounds each so a bargain for someone.

I have bought two more roses for the side garden. They were an impulse buy at two for three pounds from Lidl. They are both Hybrid Tea. One of them is Rosa Pascali which I have bought before and am very pleased with. It is white with a lovely fragrance. The other one is new to me. Rosa Dame de Coeur has deep green leaves and large, rich, red flowers and as it was sold as a fragrant rose I am hoping for a strong perfume too.

The final count of baby call ducks for this season is twelve. I have four sets of  ‘babies’ of different ages to look after. I shall have to find new homes for some of them which is always a wrench. The difficult bit is deciding who to keep and who to sell.

The first of the baby call ducks has hatched despite the cold. I think he is a boy so I have called him George after the husband of my friend Joyce from the Yoga class. 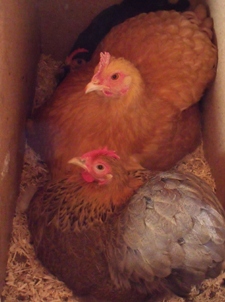 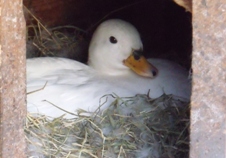 Jemima, our white Call Duck, is sitting on a nest of fertile eggs so I hope she has some luck this year. This is her second season and last year she only had one surviving duckling. Puddles, her mate is standing guard on top of their hutch and warding off all comers. We only have four call ducks now in the garden and things are much quieter and tidier. The second pair are Myley, Jemima’s baby and Rosie, one of the ducklings I hatched out last year in the incubator. They are living together and so far Rosie has six eggs in her nest. It broke our hearts to let the other calls and the runner ducks go but they are all now living in lovely places with loads of space and plenty of grass. We shall probably have to sell the ducklings if they hatch but it all helps to pay for food and bedding and the ducks will be much happier and content if they are allowed to rear a brood of their own. The ducks aren’t the only ones who are broody in the garden but as the chickens don’t have a cockerel with them there won’t be any chicks this year.

Pictures of My Hens and Ducks 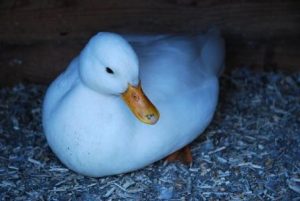 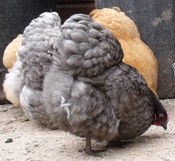 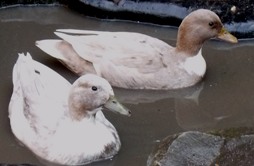 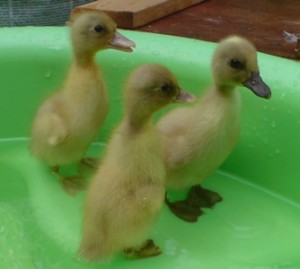 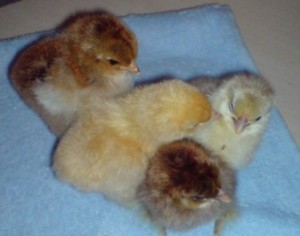 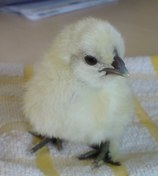 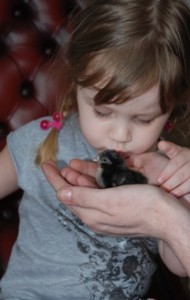 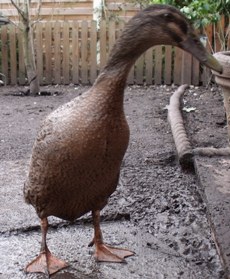 Update – 26th March and Frank the duck has gone to live with a very nice couple from Halesowen so we hope she will be very content with her new husband. 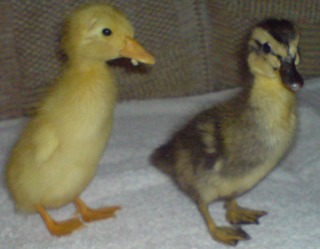 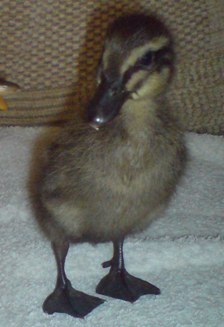 The Runner Ducks hatched this weekend. Out of six eggs we got three beautiful ducklings. It looks like two girls and a boy, Libbie named the two girls Honey and Treacle and we decided on Francis Drake for the boy, Frank for short, in honour of our good friend and neighbour at the allotment.

We spent a good two hours at the plots on Sunday and came home with a good harvest of potatoes, beans, cucumbers, cauliflowers, cabbages, courgette and tomatoes.  An enormous amount of weeds were pulled but we still came away having run out of time and knowing we had much more weeding to do. Everything was very dry and this afternoon we are having a welcome shower of rain. I am sure the plants will be getting a much needed drink.

Yesterday we took our black Silkie bantam cockerel to a new home. The chap had all sorts of chickens, loads of large white ducks and some Indian Runner Ducks. I have often looked at pictures of the runner duck and seen them in the flesh and thought them to be comical but have never considered getting any. However, when we were ready to leave the chap gave us six eggs for the incubator and there they sit now. With the prospect of little ducklings in twenty eight days I thought I had best read up on these strange members of the duck family. Apparently the ducks are prolific layers of large eggs and can lay all year round. The eggs he gave us are enormous and it is hard to believe that the outcome of the hatch will be the slim, elegant, penguin like birds in his field. Well elegant until they start to run.

Indian Runners are a very special breed of domestic duck. When they were first imported into Europe nearly two hundred years ago they attracted attention because of their tall, upright bodies and their incredible reputation for egg-laying. They had been found in the East Indies, from which they get their present name, but were referred to as penguin ducks by Dutch explorers. Information from The Indian Runner Duck Association.