Surprisingly the pear tree is a relative of the rose and the quince. Of our three pear trees in the garden only one has given us a decent amount of fruit this year. The Red Williams, a Minarette,  did have three baby pears but only one has reached maturity. It is a corker however and we are looking forward to next year when we may see more fruit. The Conference has no fruit at all but is a very healthy tree. The Beurre Hardy has about fourteen fruit all looking great and they should be ready to harvest soon. Late September or October is the time for picking pears I believe so it wont be long now. 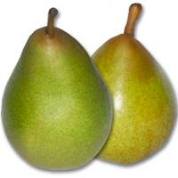 Pears are a good source of vitamin B6 and vitamin C, potassium and copper. A slow-releasing energy fruit, excellent for helping to balance blood sugar levels.

The kitchen window ledge is now full of jars of jam made from the fruit harvested from the allotment. I do still have some picking to do but I am nearly at the end of it. I have kept a few for ourselves which are in the fridge, given some away and have thirty two jars needing new homes. I have Black Currant, Red Currant, Pink Currant, Red Gooseberry and Green Gooseberry.

I used all the Victoria Plums in a pie. Although the tree was covered in blossom in the Spring only fourteen plums survived the very cold spell. The Damson Merryweather is still not ripe and I would imagine I will get another pie out of that. Both the cherry trees did well this year and the fruit was all eaten as it ripened. The pears are showing a few fruit and should be ready soon. All in all for such young trees they haven’t done badly.

It’s that time of year again. Time to pick the fruit and make the jams and jellies. To date I have made four jars of red gooseberry, one of yellow gooseberry and six jars of blackcurrant. I have already used up all my saved jars and freezer boxes and there is still a load to pick. I think I may have to invest in some bought jars but they are so expensive to buy the decision is yet to be made.

Today I bought an apple tree from Aldi. It is an Elstar, an offspring of the Golden Delicious.  I bought this cultivar once before and it died. However the original cost £25.99 and this one only cost £3.99 so there is not so much to risk. Oh well I was just as disappointed when this tree died but it was a bit easier because of the low cost.

Elstar is a crunchy apple. The flesh is lemon-white. In most Golden Delicious offspring it is the other parent which provides the essential counter-balance to offset the sweet blandness of Golden Delicious. In the case of Elstar this is Ingrid Marie, a variety which originates from Denmark. Although not a widely-known apple, it lends a bit of sharpness to the mix – inherited from its own parent, Cox’s Orange Pippin. The result is Elstar, which is probably one of the best Golden Delicious offspring.

I have bought another Blueberry bush to grow alongside our original one. I have chosen Blueberry Darrow from Wiggly Wigglers. They say it bears the largest blueberry known and is a late season, self fertile compact bush. It will be planted in ericaceous compost in a tall pot to stand next to our other one.

The currants have done really well this year and I have frozen quite a lot ready to use in the winter months. Last night I made jam with red, black and pink and although the jars are an assortment of previously used ones it all looks very colourful and tastes wonderful. I think I shall make an effort next year and get some nice jars from Wares of Knutsford especially for the job.

This is the first year that I have made red and pink currant jelly and I am very pleased with the taste of both. Last year was the first year of the bushes and we only had enough for mixed fruit and ice cream a couple of times. They are both very pretty bushes and looked beautiful hung with multiple strings of bright jewel like fruit.

When the fruit first turns red or white it is not yet fully ripe, so harvest only once it has sweetened. It is simplest to cut the bunches of fruit, called strigs, using scissors. The fruit can be stored in the fridge for a week or two after picking. Alternatively, freeze the fruit or preserve it. 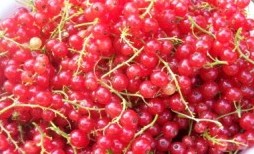 It has been good growing weather just lately. Warm and wet. The plants have loved it and we had a near miss from the Blight according to Blight watch which is wonderful. We popped to the plots this morning and dug up a good harvest of Kestrel Potatoes. We have already dug up and eaten some Swift and some Vivaldi, both of which were very good. Today we ate one of the cabbage Kilaxy and it too was a success. The soft fruit has been great this year. We have eaten loads, given loads away and the freezer is full too. The strawberries have been producing like mad as have the red currants, red and green gooseberries, black currants and rhubarb. I have found recipes for redcurrant tart and redcurrant jelly and am planning to have a try at them next week.

We brought home the first of the courgette, a few more red and white onions, peas, broad beans,  pak choi, spring onions, carrots and red lettuce. The difficult thing is keeping up with the eating. 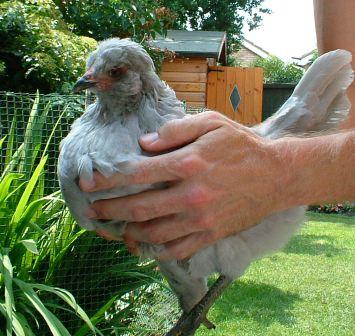 We made a latish visit to the plots in rare January sunshine. The site was deserted as most of the plot holders would have made an early start and have been tucking into their Sunday lunch by the time we drove through the gates. We took most of the seed potatoes down and put them into the small greenhouse inside the lean to. The seed potatoes we hoped would be harvested and on our plates for Christmas are just about pushing through the compost but do look very healthy. I potted up the Blueberry bought from the pound shop. It looks a bit sorry for itself so I’m not expecting great things. It is in ericacious compost and sheltering in the lean to so should be happy enough. At home we sold two of our lavender Araucana hens today to a nice couple from Yorkshire who arrived with their little boy Elliot. One of the good things about keeping chickens is the lovely people you meet along the way.

This evening I planted the remaining rhubarb in the prepared bed but am not sure whether its the Timperley Early or the Champagne that has survived. We also bought another root from Wilkos for £1.50. It was called Red Canadian. Ken Muir refused to refund the cost of the one we lost and asked for £6.95 delivery charges to send a replacement. Another lesson learned. I have planted three potatoes Charlotte in the white pot where the rhubarb had been. They are in the lean to at present but I shall move them outside when the weather warms up a little.