I have a lemon tree in the garden that I think I bought from Crocus.com many years ago. It used to be in a pot in the porch but at some point I transplanted it into the ground. This year I plan to move it again into a new large pot and am busy reading up about the best soil mix needed.

I have read that Lemon trees can be grown in pots outdoors in summer and brought inside for the winter. The fragrant flowers appear all year round apparently but are especially abundant in late winter. The fruit ripens up to twelve months later so they often flower and fruit at the same time. Although I have had this plant for many years I know very little about how to care for it. Although I have read conflicting information I think my best bet is to wait until Spring to re-pot this lemon tree. Pot and compost are waiting so here’s to Spring.

I bought a pack of lemons from the supermarket last week and just for fun I have put ten collected seeds in some damp kitchen towel and sealed them into a plastic freezer box to try and get them to sprout. Following advice from Lee of Project Diaries on YouTube I have peeled away the outer husk from the seed. It’s Thursday 12th January so I will be recording the germination time. Update 18th January one of the seeds has germinated. It is seven days since I set them. I have put the sprouted lemon seed into a 3″ pot of compost today 19th January. Monday 23rd January and two more seeds have sprouted. I have put them in damp compost like the other one. However the first one put in on 19th has still to show its head above the compost.

The seed must still be moist when it is buried into the soil. Sow the seed about half an inch deep in the middle of the pot.Spray gently with water from a spray bottle.Cover with clear plastic. Place the pot in a warm place until it sprouts. Don’t allow to dry out. After about two weeks, when the leaves emerge take the plastic cover off. Two weeks to wait then. One week on, 29th Jan, one seedling through.

Today I have sown seeds of Melon Minnesota Midget, Melon Sugar Baby and Melon Honeydew, eight of each. I tried the Minnesota Midget last year but found that they ran out of summer too soon. The plant grew and thrived and even set fruit but they were too late in the season to mature. Thats why I am sowing early this year and going to put them under cover. This morning I have sown 24 Busy Lizzie seeds in a modular propagator tray and they are now sitting on the window ledge. I have often bought these from the garden centre as small plants but have never grown them from seed. I haven’t seen this particular variety before. They were bought from Alan Romans at 50p for 85 seeds. 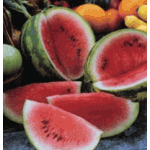 Last season one of the most exciting things we grew was the Avalon Butternut Squash but just like the melons it suffered from not having a long enough growing season so today I have sown five seeds in a four inch pot in damp compost and enclosed in a polythene bag and they are now sitting in my plastic greenhouse which is in my computer room here so I can mollycoddle them well.

Squash:Winter:Avalon F1Hybrid
A superb variety of compact Butternut Squash. Early to ripen, and with a rich sweet orange flesh, Avalon is perfect for baking and roasting. The fruits will also store well, for up to 6 months. Harvest August onwards Cut and store before frosts. Sow April to May in 3in pots at 68-86F on the surface of a good free draining, damp seed compost. Apply a layer of compost or vermiculite. Place in a propagator or seal container in a polythene bag until after germination which takes 5-10 days