Torrential Rain and More to Come.

After a day of torrential rain the weather finally cleared up enough for us to pop down to the plots and install the second Cucumber Carmen in the lean to. The first plant is still surviving despite the cold spell we have had. We had a walk round to check on everything and so far no disasters and all the mini greenhouses are is still standing. We bought home the first of the pointed cabbage and some chard. Most of the seeds we sowed are through and the potatoes are doing really well. Rob is off work next week so we hope that the weather will allow is to complete the new fruit cage, plant the runner beans and get some pumpkins and squash into the ground.

Back at home the melon seedling have been turfed out of the broody box to make way for seven new chicks, the final count of the hatch is two Pekins and five Orpington bantams. There is still a lot of potting on to do as the seedlings of pumpkins, butternut squash, tomatoes, lettuce, sweet corn, melons and pak choi are all crying out for attention.

Well the seedlings certainly had a good watering in the early hours of today. The rain was very heavy and temperatures as the morning has progressed are getting better.

The incubation continues well and we now have four silkie chicks in with the two pekins. Still nine eggs left though. I am not sure how long to leave them before I give up on them. It is only day 22 today so I will wait for now.

We managed to dodge the heavy rain yesterday afternoon and get the peas Fortune and the sweet peas planted. There were forty four pea plants and they just fitted around the inside of the old brassica cage. They will be safe from the pigeons but I am sure they will fall prey to slugs and such. The sweet peas are now planted around a lovely obelisk we bought from Lidl and I have secured it with canes and string. The plants look quite strong but we have protected them with some netting until they get better established.

Today I transferred the peas Starlight, that had been germinating in a bowl. I had been swishing them in a little water several times a day then draining them so that they were just damp. They all had lovely healthy looking shoots on them and are now sitting in damp compost for the next stage of their lives.

The weather forecast doesn’t look too good for our plans to build the tunnel next week. Rob has a week of annual leave and we were hoping it would brighten up a bit as we have a long list of jobs that need doing both on the plots and outside at home.

In complete contrast to yesterday we worked at the plot today in torrential rain. Rob pulled up the rest of the pea plants and I sat in the shed doorway and pulled the pods off. We filled a large washing up bowl. The peas were growing around the inside of the second brassica cage so after Rob had pulled them up he pulled all the weeds too. When we left it looked really tidy with quite a bit almost ready to harvest.

We brought home two cauliflowers, one we shall eat with our evening meal and the other will be put in the freezer. The plants we put in yesterday on plot eighteen were looking good and seemed to like the rain. The rain hasn’t let up all day and the garden at home is like a swamp. Luckily the allotment plots are on a gentle slope so no waterlogging there, thank goodness.

We have had days of heavy rain and yesterday the weather excelled itself with horrendous storms. Judging by the state of the garden at home I would say there has been some damage at the plot. We shall probably go and check it out later today.

We spent two and a half hours at the plot tonight. In between sheltering from the rain under the hedge we dug up the rest of the Arran Pilot and a couple of International Kidney. I made a decision not to buy Arran Pilot next year as they didn’t scrape too well. The International Kidney however have been beautiful so more of those in my plans for next year. The weeds were growing well everywhere and we earthed up the potatoes while we got rid of the weeds over on plot 18. Rob weeded the sweet corn bed and most of the fruit cage. I started the brassica cage but gave up, well my back gave up. I shall have to have another go in there it is terrible. I watered everything in the lean to and it is all growing well. Two melon plants are now in the ground in there in front of the tomatoes. We got away with no damage at all after the storms this time so we were lucky. The houses and gardens in the surrounding area have had a lot of damage from awful thunder storms and even a tornado. We came home with loads of potatoes, onions, peas, lettuce, spring onions, carrots and strawberries.

It seems to have been raining solidly since my last post. Last night we made a quick visit to the plot and I could be seen making three visits to the water butts with my watering cans, waterproofs on and still getting soaked, in order to get some water into the lean to for my precious plants. All the plants were loving the rain and the Barllotti beans were practically fighting their way through the soil to get out. There was a lot of top growth on the potatoes but no flowers as yet. A great many weeds were coming through too so we shall have some work to do when the rain stops. It will be difficult to tell the weed seedlings from the vegetable plant seedlings. 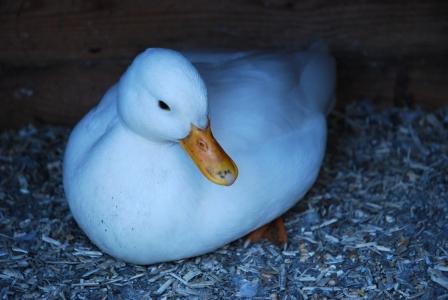 I got up this morning at 6.30 and everything was fresh and green after some long awaited rain. Our plan today is to build a cage for the sprouts with some netting that Rob bought from B&M in Dudley. We fetched some strong canes from the Allotment shop on Saturday and have loads of plastic ties. We also plan to bag up a load more wood chip both for the plots and for home. At home Jemima is once again nest building so after the disaster of her last attempt I have taken two eggs and put them under our beautiful black silkie broody Velvet. Jemima will now be left to her own devices with not even a peep in the nest to put her off. We spent a good four hours at the plot and stayed in the shed drinking coffee during the one and only heavy shower. After the rain I sowed a couple of rows of Parsley, plain and curly, in the salad bed, and three rows of cabbage, Red Rubra, Primo II and Offenham Flower of Spring, in the nursery bed. We built the cage around the sprout bed and finished getting up the weeds from the paths on plot 18 and putting down a thick layer of wood chip.

To Chit or Not to Chit That is The Question

Rain, rain and even more rain. Temperatures are very mild for January but there are bound to be frosts and low temperatures to come. Nothing much happening at the allotment so apart from delivering the poo for the compost all we have done is tie down fences etc which have been loosened by the high winds.

All we have to do now is decide what to do with them while we wait for planting time. A lot of discussion going on on the forums about whether to chit or just plant but our first concern is how and where to store them. We have decided to put our little Wilko greenhouse inside the lean to and lay the potatoes on the shelving when we are ready to chit them. They are in very good condition at the moment so we want to keep them that way. We are planning to grow some in pots and bags and the rest in the ground. I have e-mailed Alan Romans for advice about storage and planting times so we will wait and see what he says. I will have to look up again which are earlies etc as I have forgotten now. Later this month we are planning to sow another row of broad beans and peas outside and sow cauliflower and leeks in pots undercover. Hope the rain slows down a bit though or we may have to wait until February.