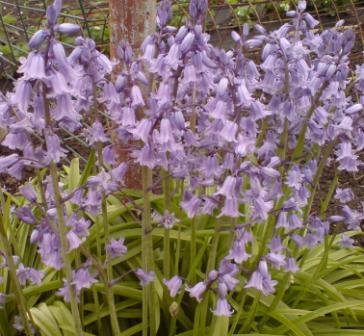 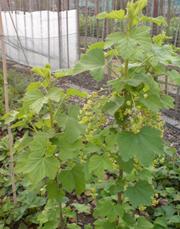 After a wet morning this afternoon turned out bright and warm and we spent a few hours working on the plots. After the downpour we had during the night the site was wet and sticky but everywhere was looking green and lush again and there were plenty of blossoms on the trees. The bluebells which are scattered here and there were in full flower. We took six eggs for the young mom and her husband and we met the new young couple who have recently taken over the plot next to them. I planted the three Pumpkin Mammoth which were threatening to squeeze me out of the computer room and also eight Cucumber Delicaat in the lean to. The Red Currant bush bought last year has shot up and is covered in buds.

Trevor gave us a tray of Onion Red Baron which he had grown from seed and also eight Tomato Gardeners Delight so we dug over a couple of beds and put them in. Despite the blustery night and the heavy rain the fleece which we put round the runner bean trench was still in place. Tonight I have put some Runner Bean Scarlet Emperor into pots to start off. 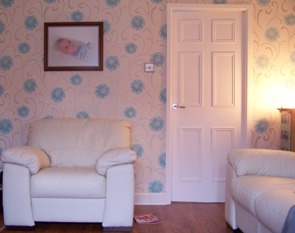 Roy, Jan and Matt have been decorating and we think they are in competition with Mother Nature. A beautiful job folks.

Roy makes a start on the pumpkin.