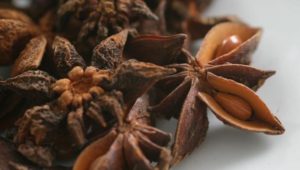 I have never used herbs and spices in my cooking and indeed admit to very little knowledge of them apart from the Sage and Onion, Mint Sauce, Salt and Pepper etcetera that are in every British kitchen cupboard. I have recently taken an interest and want to expand my use of them in my cooking. I have decided therefore to do a small series of posts as I think I learn and remember better when I write things down. Today I have made a rice pudding and to add a little spice have floated a star anise on top. It must be discarded before serving.

Star anise is a seed pod shaped like an eight-pointed star and contains seeds with an aniseed flavour which comes from the spice’s essential oil.  It is used widely in Chinese cooking and is one of the five spices in Chinese five-spice powder. Star Anise has been made in to a tea and taken as a remedy for rheumatism. The seeds are sometimes chewed after meals to aid digestion.  Like anise, star anise is an anti-flatulent and can be used as a diuretic.  The taste imparted is aniseed or liquorice and can be used when poaching fruit. By itself whole star anise is frequently used to sweeten soups and meat stews in other types of cuisines. One or two pieces are usually enough to flavor a large bowl as the taste can be overpowering. If you plan to use it as a spice rub, powdered or ground star anise is more practical. The spice is also commonly used in breads, pastries and other types of desserts because of its particular sweetness. Pudding, strudels and custards are some of the preparations where star anise can be used to add a unique flavor. Spice up a rice pudding by adding a couple of stars to a simmering pot and discarding before serving. 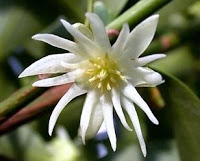 Illiciums first evolved in the Cretaceous period around 100 million years ago while dinosaurs still roamed the earth. They are a group of around 30 species of small trees and shrubs from North America, the Caribbean and Asia. Illiciums may not be instantly recognisable by their botanical name but will be recognised as the spice Star Anise which  is the seed pod of Illicium verum. The spice commonly called Star Anise or Badiam that closely resembles aniseed in flavor is obtained from the star-shaped seed pod of the fruit of Illicium verum which are harvested just before ripening. Star anise oil is a highly fragrant oil used in cooking, perfumery, soaps, toothpastes, mouthwashes, and skin creams.